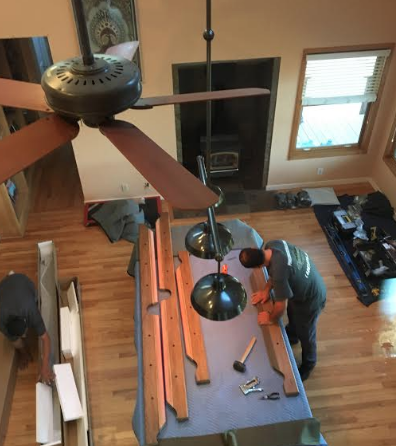 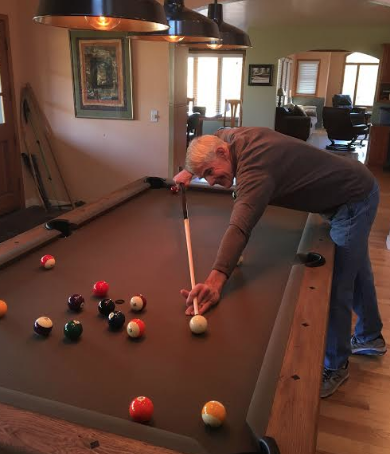 Nine ball, corner pocket. And I might have missed it!
1 of 2

Nine ball, corner pocket. And I might have missed it!

Geezer’s Diary readers who are paying way too much attention may have noticed a couple of references to playing pool in past entries.

Yes, it’s something I do, but not well. I enjoy it. It might improve my hand-eye coordination. But I’ll never be as good as I was at age 12, and that’s just something I’ll have to accept.

My game was excellent as a pre-teen. My dad probably could have brought me to a pool hall and made a buck or two betting on me. But he was a gentleman, and did not frequent such establishments.

But he did teach me the game.

Here’s how it happened:

In the early 1950s, we were one happy family in Northbrook, Illinois. Back then, this northwestern suburb was at Chicagoland’s far reaches. Just three blocks west of our Butternut Lane home, lawns and pavement yielded to open fields that stretched on forever.

There we kids could hunt butterflies, beetles, lizards and snakes. Homes in Northbrook were cheap, young families populated our neighborhood, and we had numerous friends who lived on the same block.

I was 10 and my brother was eight when Dad broke the bad news: “We’re moving.”

We were leaving the only home we had ever known for Winnetka, a higher-end lakefront suburb with bigger homes and better schools.  Plus, my dad added, “We’ll be near the beach.”

We didn’t care: We now despised Winnetka and its beaches. We’d lose all our friends. Chip and I were miserable.

A few days later, Dad took us to our future home. Which I was also determined to hate.

“No,” Dad answered as we walked in the back door.  “But I have something to show you.”

I grudgingly followed him down the basement steps. We walked past the sump pump, the furnace and the laundry room.  Next we turned the corner into a brightly lit room. With a pool table in it!

It wasn’t one of those cheap tables, but an eight-foot, made-in-America model turned out by the famed Brunswick Balke Collender company. Its green felt seemed to stretch on forever. It apparently was too big and too heavy for the home’s sellers to take with them.

I was transfixed. I had friends with ping-pong tables, but nothing like this. I almost forgot that I hated Winnetka. I grabbed a cue and I was ready to do something with it. I’m not sure what.

He did.  Once I learned the basics, I played a lot. And, as one more family from Northbrook had moved to Winnetka at the same time, fellow transplants Tod and Pete Sinding were regular competition at our table.

My dad was a purist, so most of the time we played call-shot Straight Pool. Occasionally, to make things tougher, we’d play Rotation, sinking the balls in order from 1 to 15.

My game steadily improved through my sophomore year in high school. But my grades by that time had dropped, and my parents sent me to a military school in Minnesota. There I made friends with the academy’s fellow outcasts and misfits. My grades improved. I went to college and became a journalist.

Yes, I might have made a better living playing pool, but it’s a bit late for that.

As life went on, I would play the occasional game at a bar. But my abilities had evaporated with disuse.

Decades went by and, lo and behold, I reached my 70s alone here on Yankee Hill. In a home with two living rooms.

When we built the house in 1991, it had only one living room. But 10 years later we enclosed the deck. The resulting new den was bright, had nice views and, we decided, was where our new flat-screen TV should be.

That’s when my mind drifted back to our basement in Winnetka. I realized that the long-dormant second Yankee Hill living room had perfect dimensions for a table. So I looked up Brunswick online, found a dealer, ordered a table and put in a custom set of old-timey lights over it.

“Looks like something right out of ‘The Hustler,’” said a friend.

My long-dormant game, however, is not right out of ‘The Hustler.’”  My 12-year-old self would kick my ass. Shots that I made as a kid without thinking are problematic today.

Bank shots? Position play? English? All lost skills. “Pool and Billiards for Dummies”? A few books are ahead of it on my list.

But playing is still fun: I can do it alone, which is handy in this COVID era and is a challenge. With friends it’s a highly social game, giving rise to jibes, jokes, snide comments and lots of laughter. Depending on the level of play, it can also elicit gasps, groans, profanity and rare high fives.

Every once in a great while, I will pull off a shot that would do even the much-younger me proud. Which makes my night.

At least it does until I blow an easy one with the game on the line.