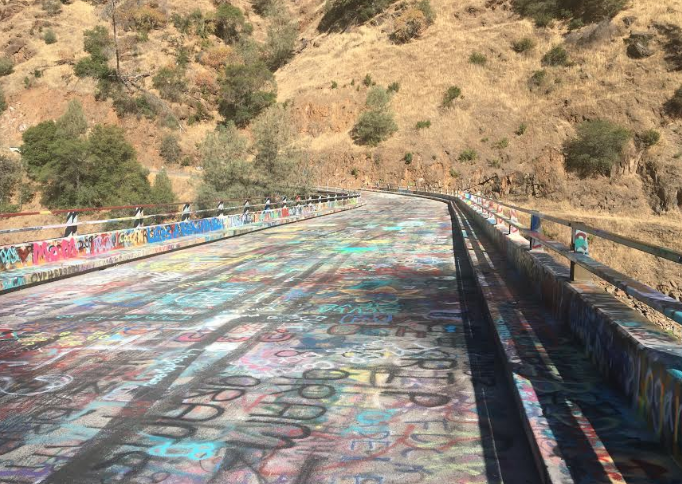 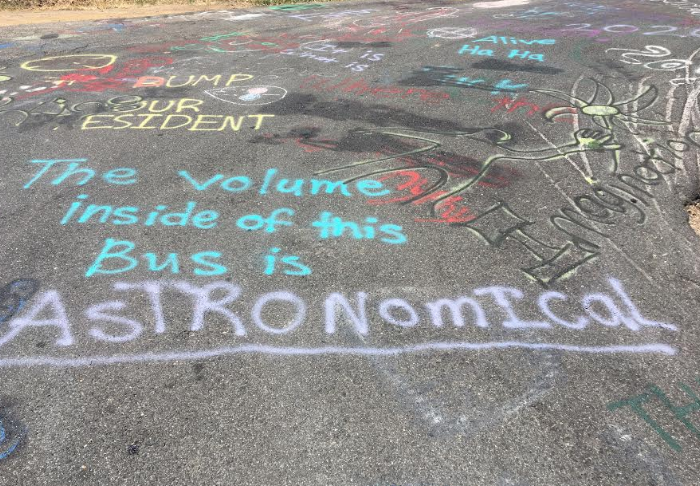 You hear it often: In these times of Covid, folks have more time on their hands and true talents are emerging.

Painters are turning out more and better canvases, gardeners are planting and harvesting more fruit and vegetables, musicians have more time to practice and sound great.

Some of us have found new hobbies: Rookie birdwatchers are seeing record numbers of our feathered friends. Novice hikers have the time and energy to explore our many trails.

Veteran writers have pulled out old manuscripts and first-timers are  starting new ones. Both can now can say “Yes, I am working on my novel!”

And taggers old and new can now boast that, “Yes, we are defacing more county roads than ever.”

OK, this may be a generalization. It’s based only on the changing colors on a few yards of pavement at Beer Can Corner, a 3,192-foot promontory near the top of Yankee Hill Road.

Its proper name is Blewett’s Point, but nobody has called it that for decades.

Beer Can earned its name decades ago as a popular hangout for teens, who could watch the sunset then drink ’til dawn (or until deputies arrived). Over the years, this corner also became one of the worst illegal dumping grounds in Tuolumne County.

It has been the target of many cleanups, but dumping continued.  The slope below Beer Can became a disgusting mélange of hemorrhaging upholstery, rusting appliances, reeking garbage, fouled diapers, car hulks and more.

About three years ago, after yet another major cleanup, the U.S. Bureau of Land Management put up a chain-link fence to block dumping. No, it’s not pretty, but it’s tall enough that throwing garbage over the top is not easy.

I am a fan of the fence, but many of my neighbors are not, saying the barrier mars pretty sunset views and has led to trash dumps elsewhere on Yankee Hill.

Now Beer Can has a new problem: taggers. With time on their hands, they’ve covered the road’s sharp bend in red, yellow, green and orange graffiti.

But is it art?

You tell me: On the corner’s pavement is an ornate nine-petal flower, a few painted hearts and a stencil of deer mating.  “Queen” is sprayed in fancy script, there is a painting of something called “Evil Panda.” In curly black-and-blue is “Stay Humble, Huscle (sic) Hard.”

If the Sheriff’s Office is looking for clues in a pending case, a guy painted “Clayton A. Hits Women” and signed it “Jackson V.” He left no phone number.

“Live Fast Love Hard Die Young” advises another Beer Can tagger. A several-week-old “TRUMP IS OUR PRESIDENT” tag was later spray-can edited into “DUMP OUR PRESIDENT.” Then there’s this fairly accurate reflection on our times: “2020 SUKKZ.”

Finally comes this quizzical reflection: “The volume inside of this bus is ASTRONOMICAL.”

A comment on Tuolumne County Transit? Did a driver have the radio on too loud? Or is “bus” metaphorical? Is it the universe? The solar system? Humankind?

For perspective, a week ago I inspected Tuolumne County’s spray-paint Sistine Chapel: The Wards Ferry Bridge.

This span is covered by tags from end to end and over the sides. Its last cleanup may have been decades ago. Its spray paint is now in archeological layers.

Yes, it is stillillegal to deface a public thoroughfare. But, said county road superintendent Mike Cognetti, “that bridge is a battle we lost a long time ago.”

“We’d paint it, then the taggers were right back at it the next day,” confirms Duke York, a longtime county roads boss who still works part-time for the department. “It’s a no-win situation.”

Also, there is a Catch 22 on paint: Applied to a steep corner (like Beer Can) or canyon-bottom bridge (like Wards Ferry), York warned, it makes potentially dangerous roads even more slippery.

For a while, some hoped the WF bridge might become a concrete canvas for something more sophisticated, perhaps a higher grade of graffiti. Or, if you will, “public art.”

This did not happen.

When you’re painting at midnight in the middle of nowhere, artistic license (or just plain-old license) is unlimited.

Other Wards Ferry samples:  “Free Your Mind,” “It is what it is,” “Hoes Before Bros” and, of course, “Corona is Fake.” There are a number if RIP’s, including one for “My Damn Good Dog,” who apparently died on March 12.

One philosopher sprayed “What we’ve got here is a failure to communicate,” evoking the prison captain’s memorable quote from the 1967 Paul Newman classic “Cool Hand Luke.”

Which means there could be taggers my age at work.

In another political period piece, an aerosol commentator insisted that “George Bush did 9-11.”

But there is also paint-can sentiment: “Slow down, enjoy life,” suggested one tagger. “Your are my sunshine,” emoted another. And an apparently loving son memorialized “MOM,” in large red letters.

Then, just before I drove back up the canyon, I saw it. In exactly the same style it was sprayed on Beer Can Corner. “The volume inside of this bus is ASTRONOMICAL.”

I scratched my head again, then came to a conclusion:

We could have months of quarantine ahead of us. So these taggers might just think about taking up gardening or birdwatching – both of which you can do in broad daylight.

Sure, and when that happens, we’ll have conquered Corona and will be beginning 1,000 years of world peace.