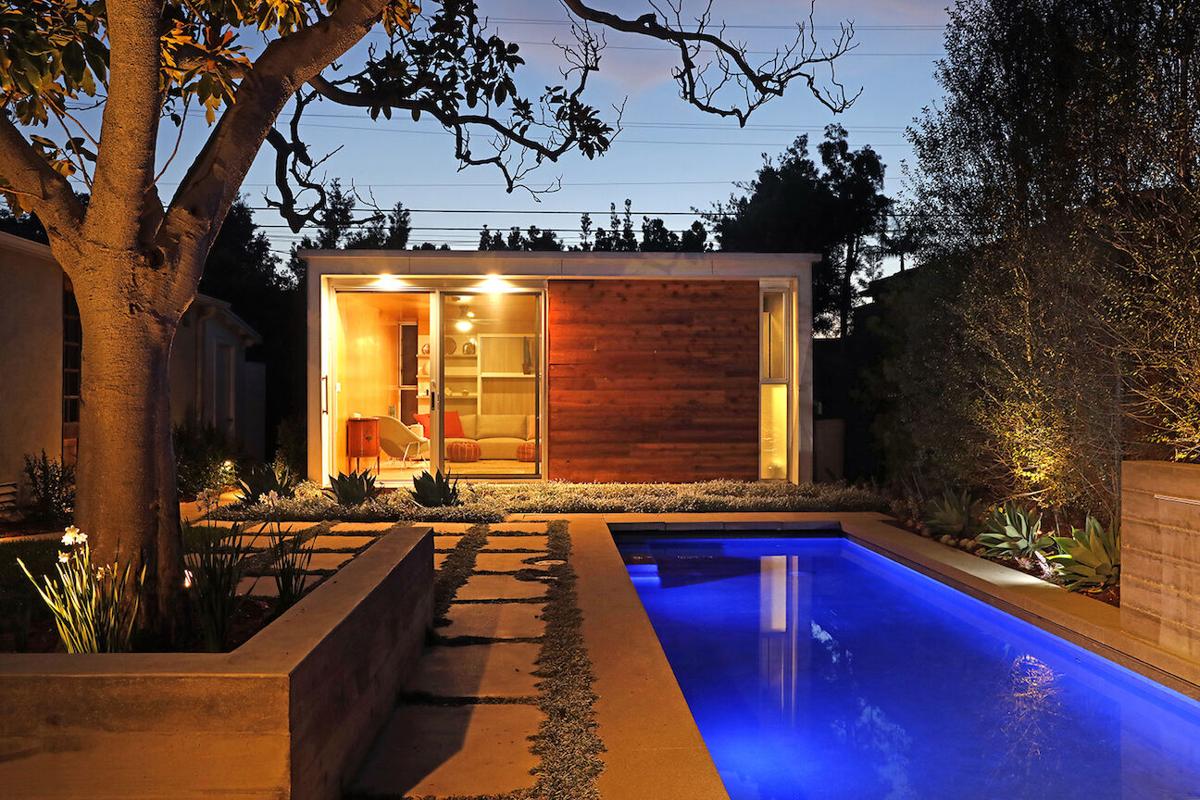 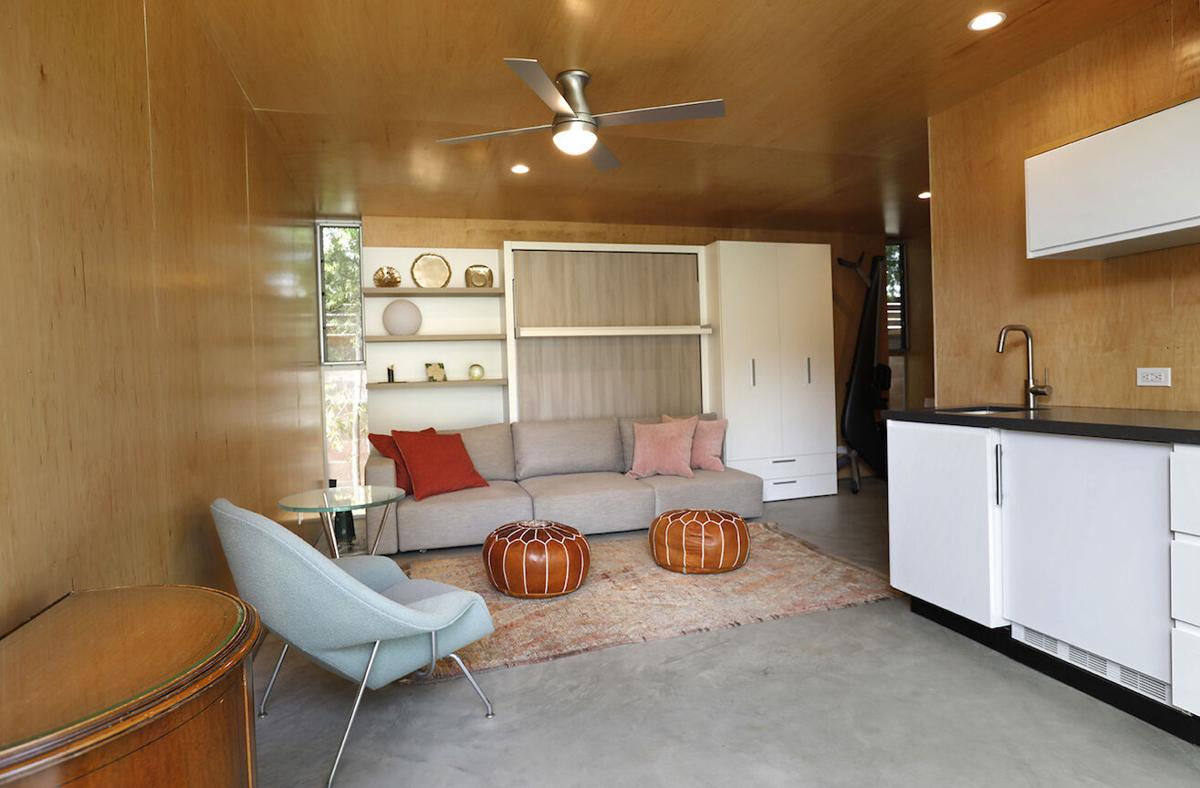 The living room, bedroom and kitchen of the ADU designed by Minarc. (Carolyn Cole/Los Angeles Times/TNS) 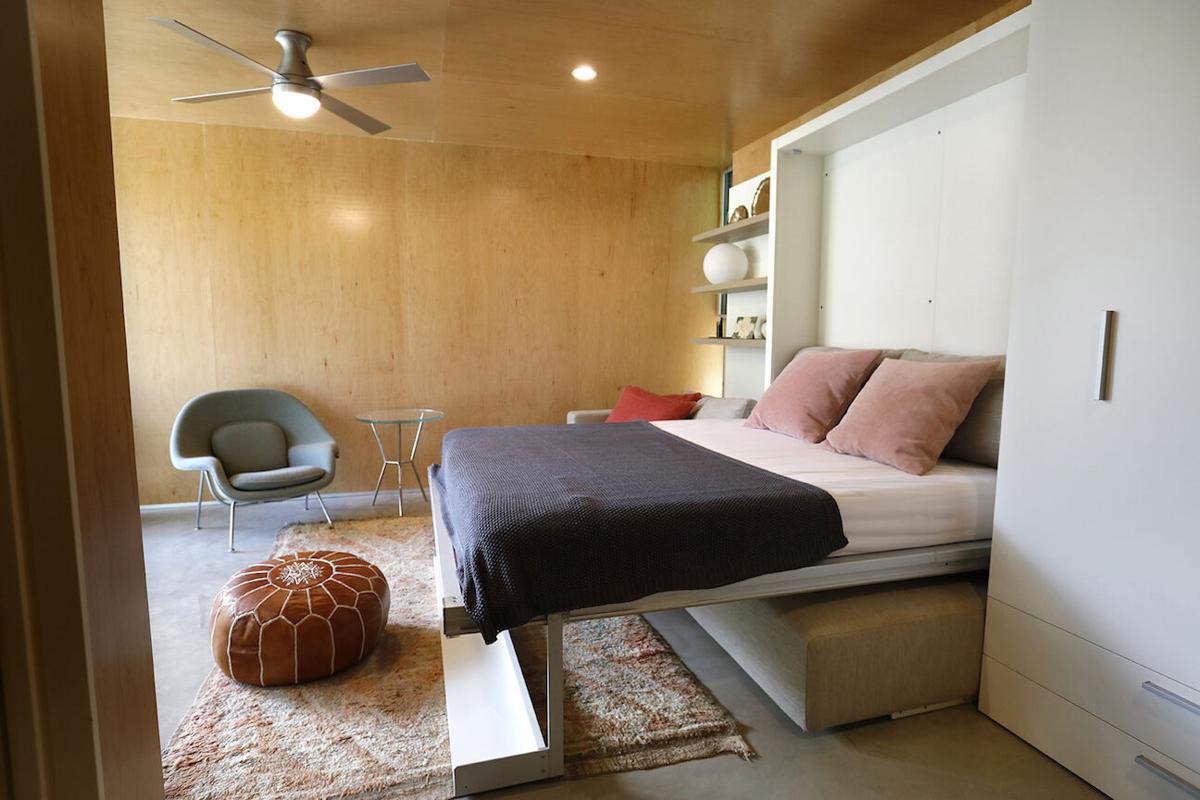 The living room features a space-saving queen Murphy bed by Clei, which pulls down over a couch. (Carolyn Cole/Los Angeles Times/TNS) 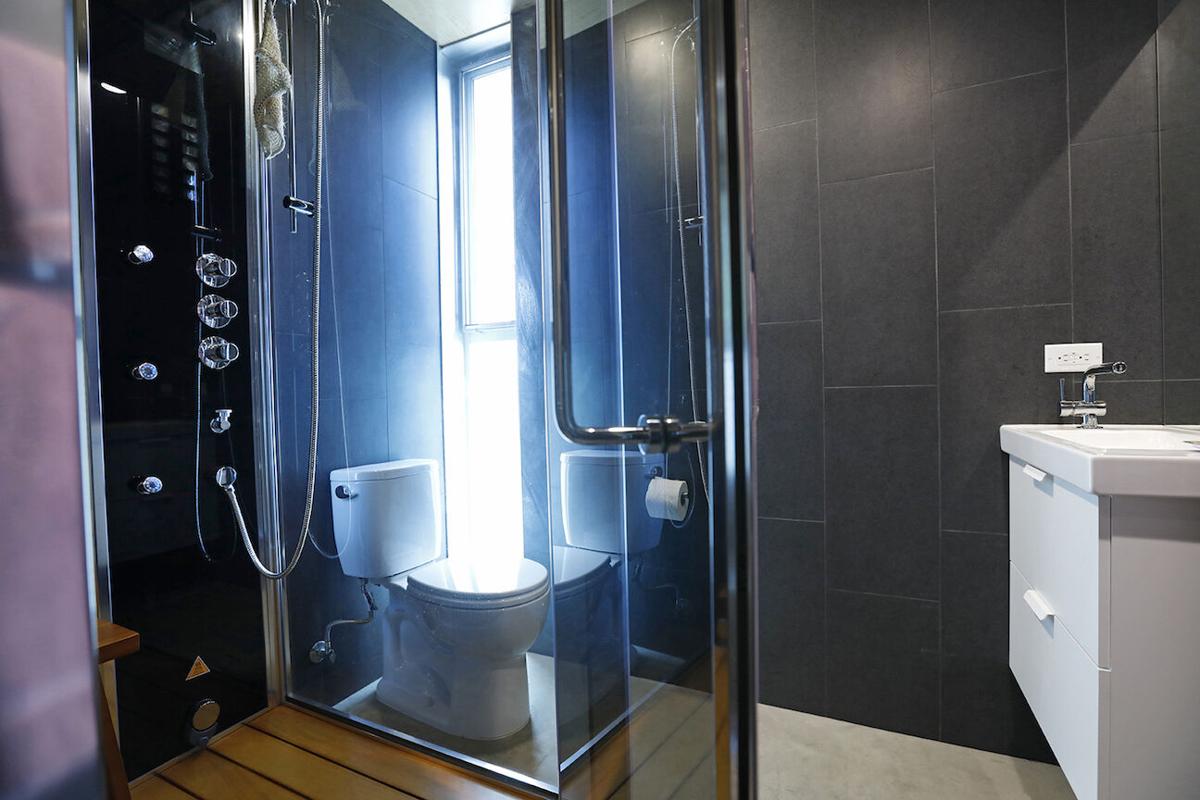 A steam shower and sauna in the bathroom. (Carolyn Cole/Los Angeles Times/TNS) 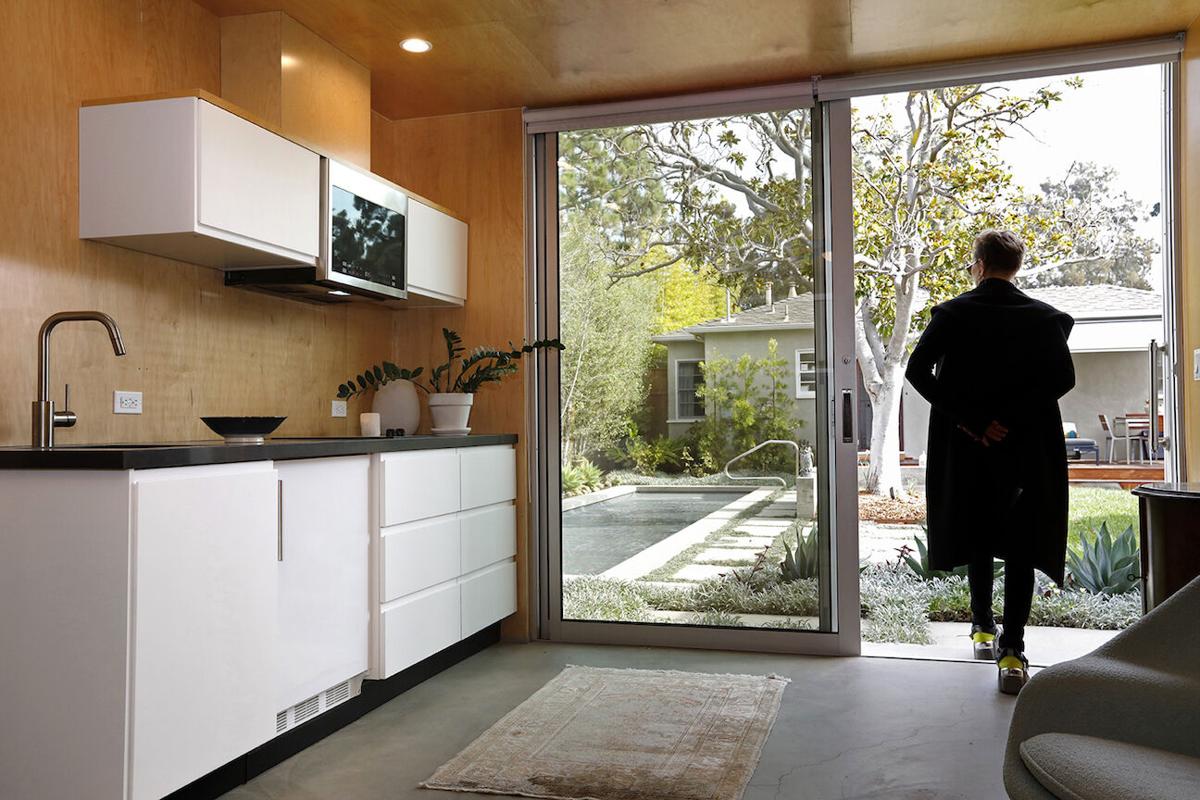 Hereâ€™s a closer look at the kitchen, as Erla DÃ¶gg IngjaldsdÃ³ttir walks out of the ADU toward the pool and main house. (Carolyn Cole/Los Angeles Times/TNS)

The living room, bedroom and kitchen of the ADU designed by Minarc. (Carolyn Cole/Los Angeles Times/TNS)

The living room features a space-saving queen Murphy bed by Clei, which pulls down over a couch. (Carolyn Cole/Los Angeles Times/TNS)

A steam shower and sauna in the bathroom. (Carolyn Cole/Los Angeles Times/TNS)

Hereâ€™s a closer look at the kitchen, as Erla DÃ¶gg IngjaldsdÃ³ttir walks out of the ADU toward the pool and main house. (Carolyn Cole/Los Angeles Times/TNS)

SANTA MONICA -- Nearly 30 years after purchasing a modest two-bedroom, one-bathroom house in the Sunset Park neighborhood of Santa Monica, California, Michael Solomon and Naomi Lieberman turned their attention to their backyard, where they hoped to add a guesthouse that would accommodate their family and friends.

In what seems inconceivable by today's real estate standards, they purchased the 1,300-square-foot house in 1994 for $300,000. But decades later, desiring a bit more space, they had little success finding a larger dwelling they both liked. "We lucked out and bought the house right after the Northridge earthquake," Solomon explained. But today, "there's really no affordable place to go" if you want more room, he added.

Given the deep attachment to their longtime neighborhood, the couple decided to add an accessory dwelling unit, or ADU, in the backyard, rather than renovate or move somewhere else.

Their decision to stay put is not surprising in neighborhoods like theirs, where small, single-family houses sell for more than $2 million and nearby neighborhoods are among the most expensive ZIP C odes for buyers in the country.

Situated on a large lot with a detached garage and large backyard, the traditional 1939 house, with others in the tract, was built for Hughes and McDonnell Douglas aircraft employees during the 1930s and '40s.

"We felt it would be awkward to add on to the house" since it's so "old-fashioned," said Solomon, a former music executive and artist manager who now serves as the Southern California representative for Penguin Cold Caps, a British line of headwear designed to minimize hair loss during chemotherapy. He liked the idea of a separate structure, however, especially if it could incorporate elements of Midcentury Modern design, of which he is a fan.

Interested in eco-friendly design, the couple were inspired by the possibilities of prefabricated construction after touring a Venice house designed by Erla Dögg Ingjaldsdóttir and Tryggvi Thorsteinsson of the Santa Monica-based firm Minarc.

"We loved the quirky nature of what they did," Solomon said of that house's open-air floor plan and green building solutions.

So they hired Minarc to craft something for them.

Such accessory dwelling units are on the rise in Los Angeles, where the city is relying upon ADUs as a way to deal with insufficient housing needs: In 2020 alone, the city of Los Angeles received more than 5,000 ADU applications.

The house that Minarc built for Solomon and Lieberman is known as a Plús Hús (Icelandic for "Plus House"), and the blueprint is one of several available through the Los Angeles Department of Building and Safety's Standard Plan: The program offers more than 40 stylish pre approved ADU designs aimed at simplify the permitting process.

The prefabricated ADU is made of mnmMOD building panels, a wood-free, fireproof option composed of recycled steel and durable expanded polystyrene insulation board.

Minarc's compositions for the couple echo what the designers call their desire to create sustainable and flexible housing.

"We wanted to change the mindset when it came to building," Ingjaldsdóttir said of the Plús Hús. "We started thinking about this 10 years ago when we built our first prototype. We looked into [using shipping] containers, but they are not made for living because there is no insulation, and the ceilings are low. Why put a lot of energy and work into something that is not made for humans? We started thinking about kits for crises. We thought, 'How can we help if someone's house burns down?'"

Impressed by Minarc's low-waste, sustainable approach to building, Solomon and Lieberman chose to install a custom Plús Hús, a 320-square-foot studio that was manufactured in downtown Los Angeles, arrived as a flat kit and was assembled on-site in a day.

Even though it takes up some of their treasured yard, the tiny studio adds enormous appeal and a touch of Modernism to the backyard, where drought-tolerant landscaping and a new lap pool complement the serene addition.

Located next to the garage, the ADU offers natural light and privacy at the same time, courtesy of narrow floor-to-ceiling aluminum windows in three corners. A heavy, well-insulated sliding glass door connects guests to the pool, backyard and main house.

Inside, the interiors reflect Solomon's minimalist preferences, with white maple cladding on the walls and ceiling and a space-saving queen-size Murphy bed from Italian furniture maker Clei ($15,000 at the time at Resource Furniture in West Hollywood) that offers storage and pulls down easily over an integrated sofa for overnight guests.

In an effort to reduce volatile organic compounds inside the unit, there is no paint, nor carpeting, and the bathroom tiles are certified by the nonprofit Greenguard Environmental Institute for indoor air quality.

Thanks to the structure's energy-efficient mnmMOD interior wall panels, Solomon said the ADU is always a comfortable temperature. "The insulation is great," he said. "If it's a warm day outside, it'll retain the heat and stay warm at night. It's very efficient and cheap to operate."

The couple splurged on a luxury steam shower and sauna from Aquapeutics in the bathroom, but the kitchenette features inexpensive cabinets from Ikea (FÖRBÄTTRA cover panels in matte white paired with VOXTORP drawer fronts), Caesarstone countertops, a compact 24-inch refrigerator and an electric cooktop and microwave oven for a clean-lined, modern look. "We didn't want to crowd the space," Solomon said.

The small footprint proves that you can have distinct living areas in just 320 square feet, as the kitchenette, living room and transformable master bedroom, dining room and bathroom each have an individual presence in the shared space.

After six months of construction, the project was completed in January of 2020 at a cost of about $150,000, due to add-ons. Minarc also offers one-bedroom units starting at $79,000 for materials, with custom details like skylights, windows and door upgrades available for an additional fee.

As a consequence of the coronavirus pandemic, the couple have hosted only a single guest since the ADU was completed. Still, the ADU was a prescient move, Solomon said, as more and more Americans work from home as coronavirus variants emerge. Lieberman, a psychotherapist, chose to give up her office of 20 years and now uses the ADU as a virtual therapist's office.

"We didn't build it for that reason," Solomon said, "but she loves working in that space."

As someone who appreciates the ADU's connection to the outdoors, Solomon said the only downside of the ADU is a lack of abundant sunlight. "The bathroom and dining area in the far corner are a little dark. So I'm going to put in solar light tubes that have light-gathering lenses."

The ADU may have been a compromise in terms of space, but for the couple it has been a good one: Solomon and Lieberman can stay in the neighborhood they love while Solomon works out of his office in the garage and Lieberman works in the ADU. They can enjoy the second bathroom they've always wanted and, hopefully, someday, when the coronavirus pandemic ends, they will be able to house their family in the space. Looking ahead, Solomon said the ADU could possibly be used as housing for a caregiver, should one of them ever need assistance.

There's even a rowing machine tucked in the ADU, for when the desire to work up a sweat arises.

"We got everything we wanted in a small compound," Solomon said. "I wanted something that looked great. Now, when I look out into the backyard, I see a garage that was built in 1939, a pool, a comfortable patch of grass for our dog and a guesthouse that was built two years ago. They all fit together beautifully. That's the look that I wanted. And it's so private, my neighbors can't see me. If I could be a nudist, I would."

We asked Minarc to break down the budget for a typical accessory dwelling unit. Applicants for the Standard Plan select an approved plan, then Los Angeles Department of Building and Safety staff review factors for the specific site, including compliance with the zoning code and foundation requirements. Note that the city's preapproved Standard Plans may not be approved for use in certain situations or site conditions. The Standard Plans are designed and owned by the design firms and are purchased directly from them as the plan owners. Minarc also works with ERLA Construction services to facilitate the build as contractor, but it is not required. Homeowners are welcome to use their preferred construction company, or they can pull a permit to "build as homeowner." With those caveats in place, here's a general look at what a Plús Hús ADU costs: