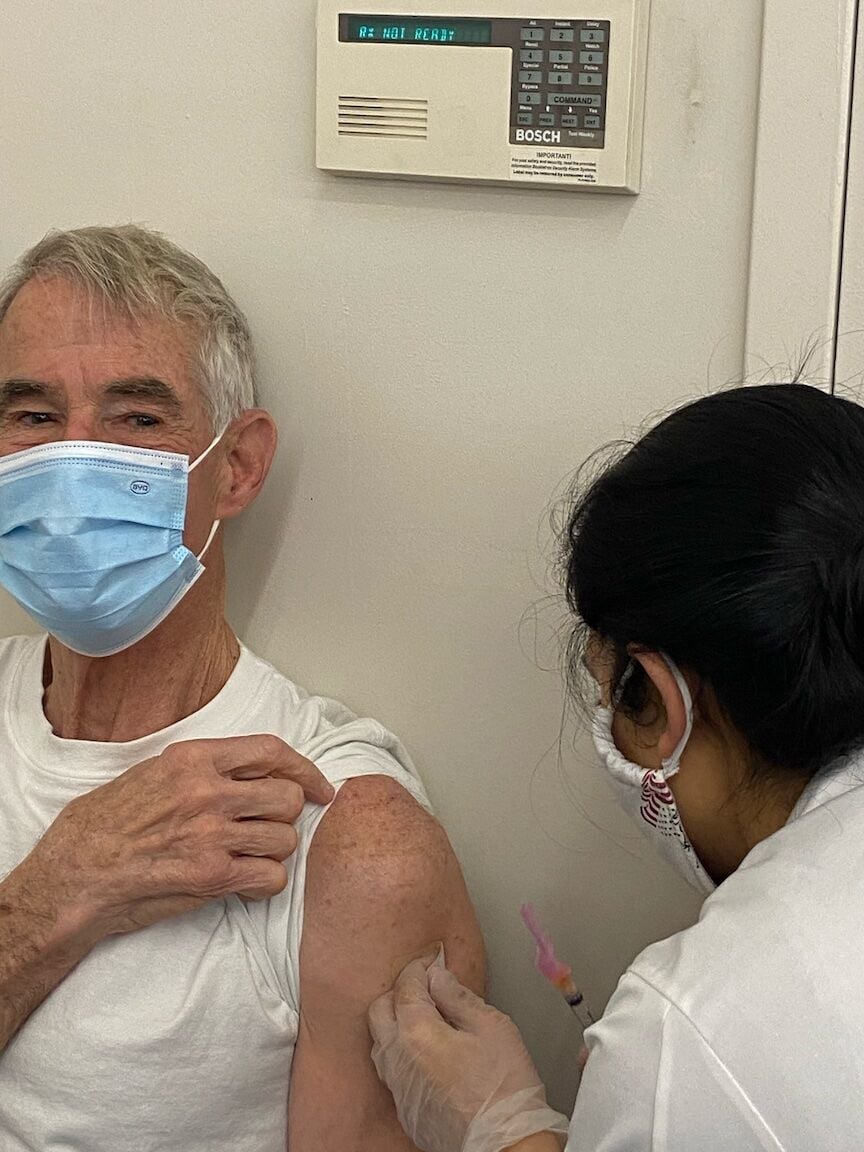 Yes, there is a smile under that mask. CVS technician Sherry George gives a grateful Bateman his long sought COVID shot. 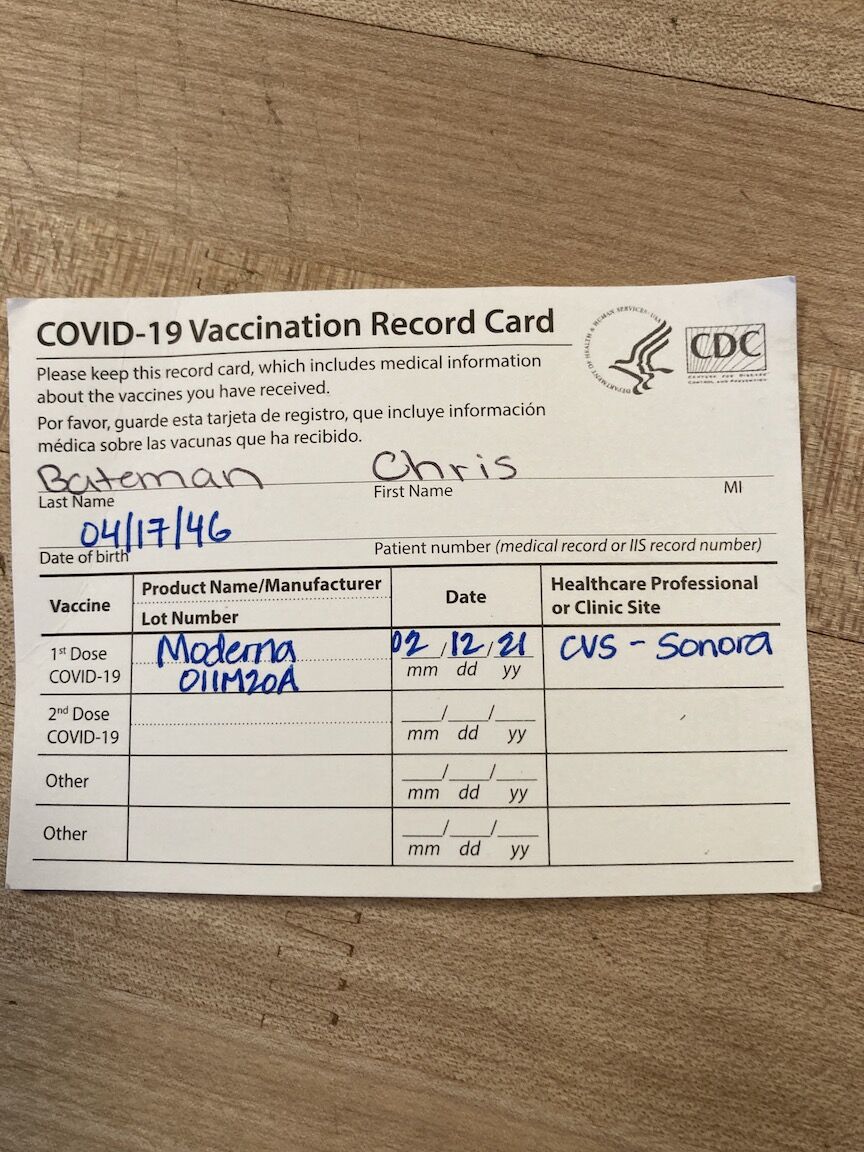 Our correspondent is now a card-carrying shot receptor, and this is proof. 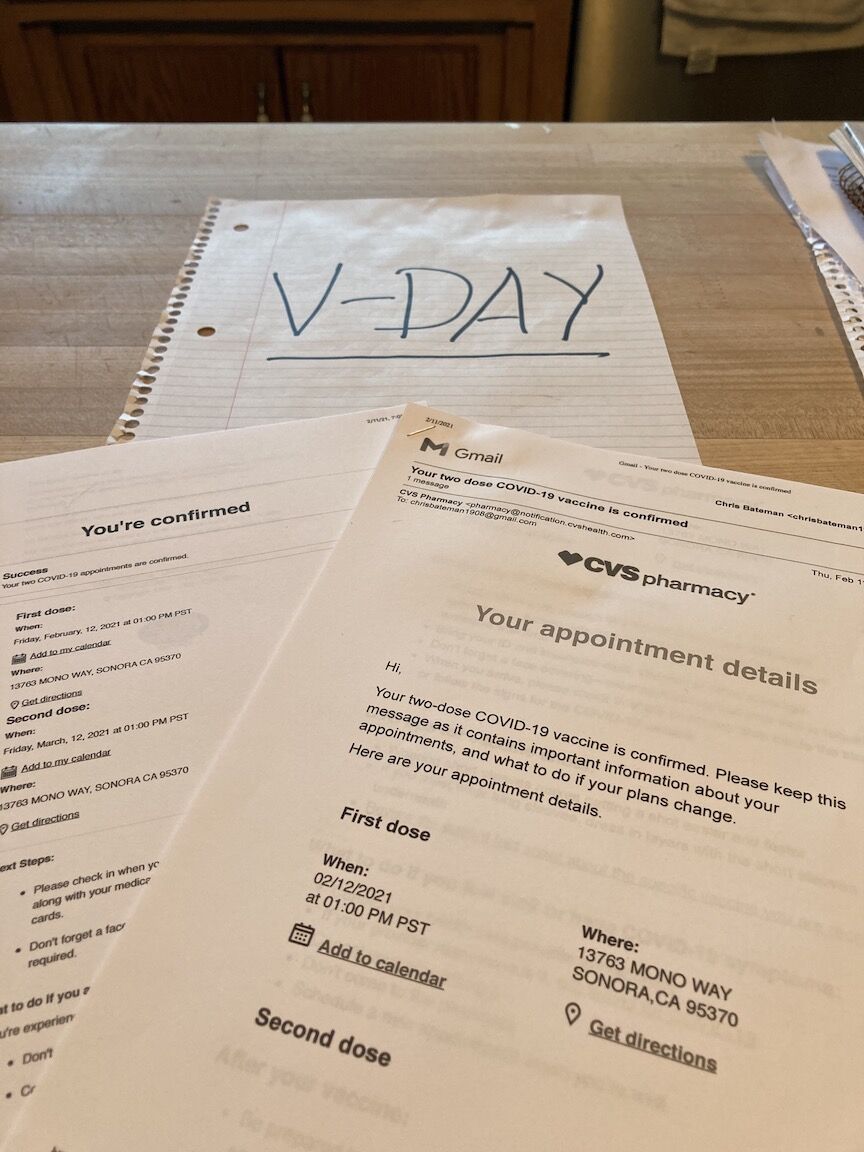 You can't put out too many reminders on the morning of your vaccine.

Yes, there is a smile under that mask. CVS technician Sherry George gives a grateful Bateman his long sought COVID shot.

Our correspondent is now a card-carrying shot receptor, and this is proof.

You can't put out too many reminders on the morning of your vaccine.

Getting a COVID vaccine these days is kind of like this:

So you sign up and get your official-looking confirmation. But a few days later, your alleged appointment is cancelled and you start from scratch.

This actually happened to me: Through friends and friends of those friends, I scored a vaccine appointment Friday with a state program called MyTurn.CA at the Gladys Lemmons Senior Center in Oakdale. I had never heard of either.

It didn’t matter. I was ecstatic. I had another printed confirmation form in my hands and my shot was at the end of the week. What were the odds I would be cancelled?

One hundred percent, it turns out. A couple of days later, I learned, it was NOT my turn. Appointments for the Friday vaccine clinic in Oakdale had been given out “due to a technical error.”

So now I’ve been cancelled twice. As I write this, I’m on hold with Sutter Health, proprietors of a Sacramento hospital where I had hip surgery more than 15 years ago.

If I’m still in the Sutter system, a vaccinated friend told me, this health-care goliath has hospitals and clinics everywhere and could set me up with a shot.

And if that doesn’t work, maybe I’ll check out the Oakland Coliseum — now a mass vaccine site. But I have this nightmare of showing up at the park and being told that, no, I cannot get a shot and that all vaccines are reserved for cardboard fan cutouts which had been at A’s games last year.

But hold on: Sutter just picked up. Not only am I still in its system, but I got an appointment!

That’s the good news. Here’s the bad: My shot is scheduled for 10 a.m. on March 26. That’s 44 days from now. By then I might be the very last geezer in California to get one.

“We hardly have any vaccine now,” the Sutter operator apologized, so I kept the appointment.

In stark contrast, a Sonora friend told me of a neighbor who called the Tuolumne County Public Health Department on a whim. “Just come on down,” the receptionist told him Tuesday. “We’ll give you a shot right now.”

And he got one at the HD’s drive-through clinic at Sierra Bible Church.

Me? I had filled out the department’s “Vaccine Interest Form” weeks ago.  So why wasn’t I called? I phoned the Health Department to bitch, but the line rang about 30 times, then I was told my call could not be completed.

So I filled out a second form, and began to wait. Again.

Which brings me to Thursday morning, when I got a text just after 8:30. It was my longtime friend and former Union Democrat colleague, Patty Fuller. “I just saw on the news that CVS in Sonora will have vaccines starting tomorrow,” she said, “...appointment required.”

I got online immediately and, in fewer than 15 minutes,  made a 1 p.m. appointment Friday. I also called Dave and Teree Urquhart, my partners in the vaccine search — and they too got Friday CVS appointments. Then I thanked Patty profusely.

Once more, we all had printed confirmations: But cancellation, I well knew, was only a phone call or email away.

Sure enough, Thursday afternoon I saw a message on my phone. It was from “Marjorie at CVS,” and she said my shot at the Sonora pharmacy was off. “We read your article in The Union Democrat, we talked to Leslie at Adventist Health, and, I’m so sorry, but we just can’t do it,” she said.

Leslie, astute readers may remember, was the Adventist operator who told me I had been a casualty of a hospital computer glitch which overbooked 500 vaccine seekers for a Feb. 6 clinic. Marjorie intimated that Leslie did not have good things to say about me.

I was in shock. Then I began to think about it — and the more I thought, the less likely and the more preposterous it all seemed. Next I got a call from a woman whose voice sounded like Marjorie’s, but in fact belonged to Molly Matheisen, a longtime technician at the Twain Harte Veterinary Hospital.

“Marv put me up to it,” she confessed, “but I have to come clean. I couldn’t let you suffer any longer.”

Marv Ordway, my longtime cycling companion and friend, was Molly’s boss before he sold the vet hospital. He is also a notorious practical joker who knew I had already been cancelled twice. Apparently he could not help himself.

So I called Marv. “CVS Pharmacy,” he deadpanned. “Can I help you?”

I helped him to a few choice words. We did end up laughing together, but it took me a few minutes to see the humor in Marv’s prank.

Now, let’s move to Friday morning: The night before I had put two copies of CVS’s confirmation form on my desk as well as a scrawled sign reading “V-DAY.” At 74, I’m more forgetful than ever, but I wasn’t about to let this appointment slip through the cracks.

I didn’t ride my bike or hike that morning either. Because what if I fell?

Then, about 10 o’clock, my phone rang and my heart sank. But it wasn’t CVS. It was Leslie from Adventist.

“I’m making good on my promise,” she told me. “We have a spot for you at our vaccine clinic next weekend.”

Yes, after the overbooking fiasco, Leslie had pledged that the hospital would get me a shot “within a week or two.” I hadn’t believed her, but now she was delivering. And I was saying no.

Telling her about CVS, I apologized. But Leslie, an executive assistant at Adventist, was as gracious as ever. “Our real goal is to have as many of our residents vaccinated as possible,” she said, “and it really doesn’t matter where people get their shots.”

Next she gave me her personal line at the hospital just in case my CVS appointment fell through. I was charmed.

But it did not fall through. Although Friday was the first day of shots at the Sonora store, everything went smoothly. I was ushered to a vaccine area near the pharmacy counter and within minutes I got a shot.

As you might imagine, spirits among us finally successful vaccine seekers were high. Teree Urquhart and her friend Marilyn, who both took photos of me being needled, were among the 1 p.m. recipients. Dave got his later in the day.

We traded texts that night, reviewing the long, winding road to shots. “But what are we going to talk about now?” I asked.

I was serious. For weeks, the search for a shot had monopolized our lives. I’d go online, connect with friends and pursue leads every day. Without those friends, I might be searching still.

So here’s my advice to fellow geezers who have yet to be vaccinated: Reach out to your friends. And don’t forget your kids (or even your grandkids) — who are likely way more tech savvy than you are.

Consider this tale from Phil Krone, a lifelong friend who still lives in the Chicago area — apparently a very difficult place to find a shot. Yes, Walgreens supposedly had vaccines, but there are scores of these pharmacies in the area and checking one after another without success was wearing Phil out.

Then he found out from his daughter Tory that — get this! — “her husband Brendan has a cousin, Maddy, whose husband, Tom,” had written a code that could at once scan all Walgreens’ Chicagoland stores for appointments. Tory and Brendan then teamed up, with one birddogging open slots and the other poised to book Phil in.

Sure enough, they found a cancellation at a Walgreens on Chicago’s south side and pounced. My old friend, after an hour-long drive, got his shot.

So don’t go this alone.

Meanwhile, what are we going to talk about when vaccines are in the rear-view mirror?

Well, how about travel, parties, ball games, socializing, reunions, celebrations and dinners out? Which, if and when enough of us get shots, just might re-enter the realm of possibility.