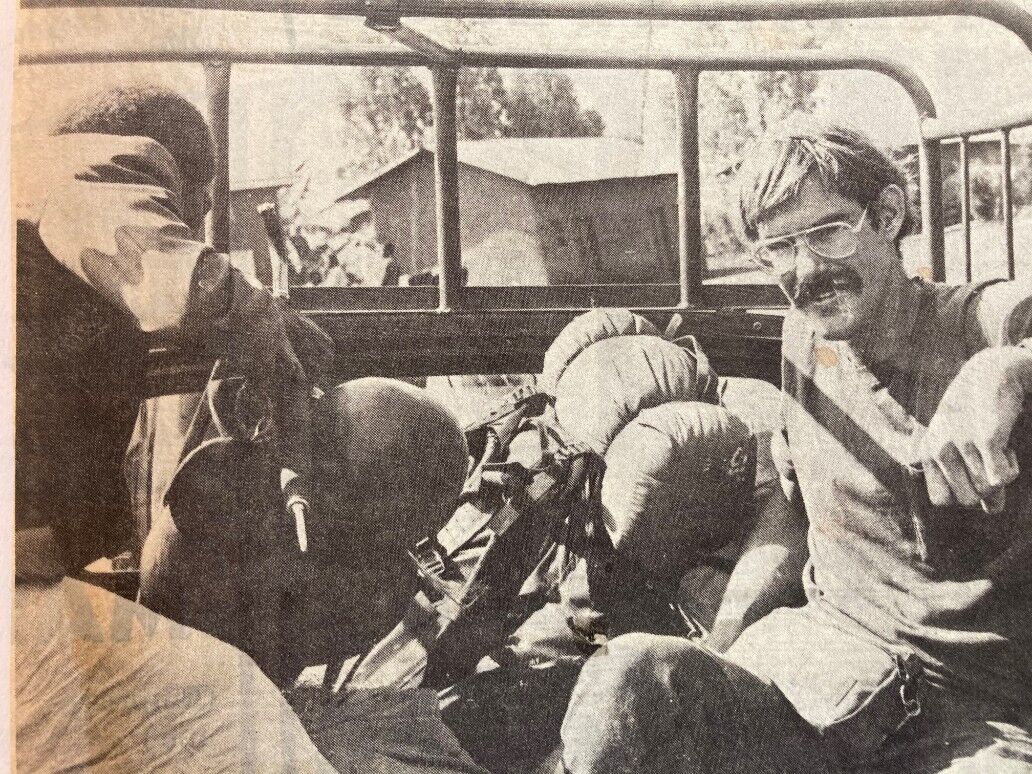 ON THE ROAD in Tanzania: Bateman, on the way to Ngorongoro and his buffalo rendezvous. 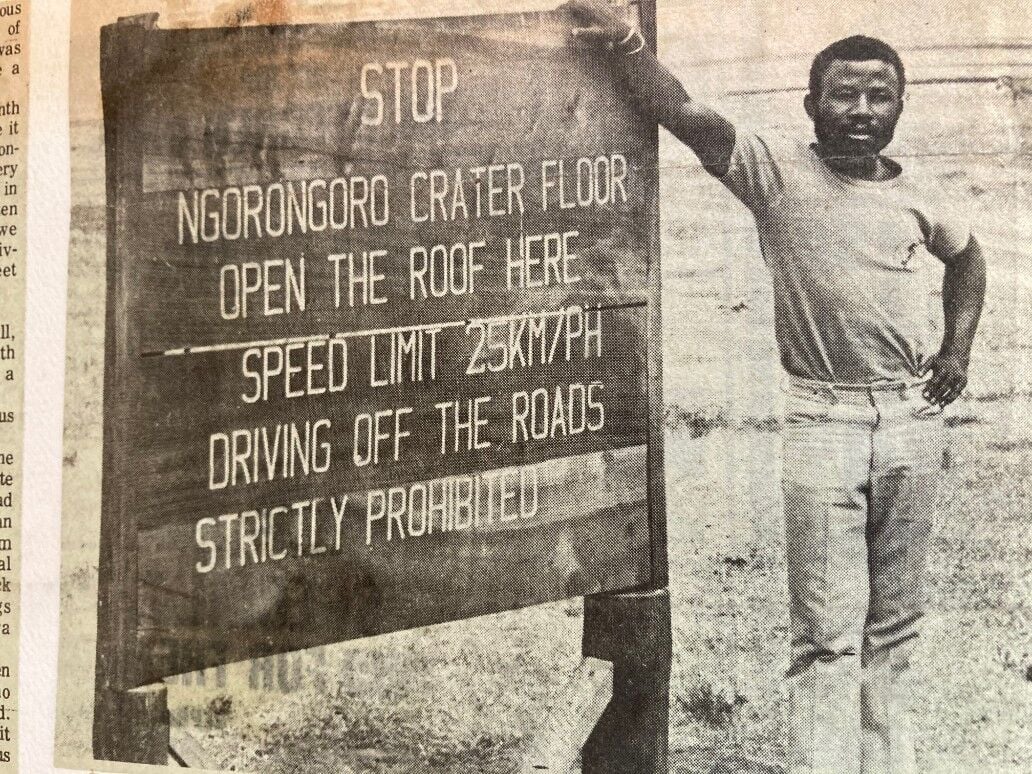 OUR TANZANIAN game guide, Elvis Baranbas, on the Ngorongoro Crater floor. No, Elvis was not with us on our ill-advised walk. 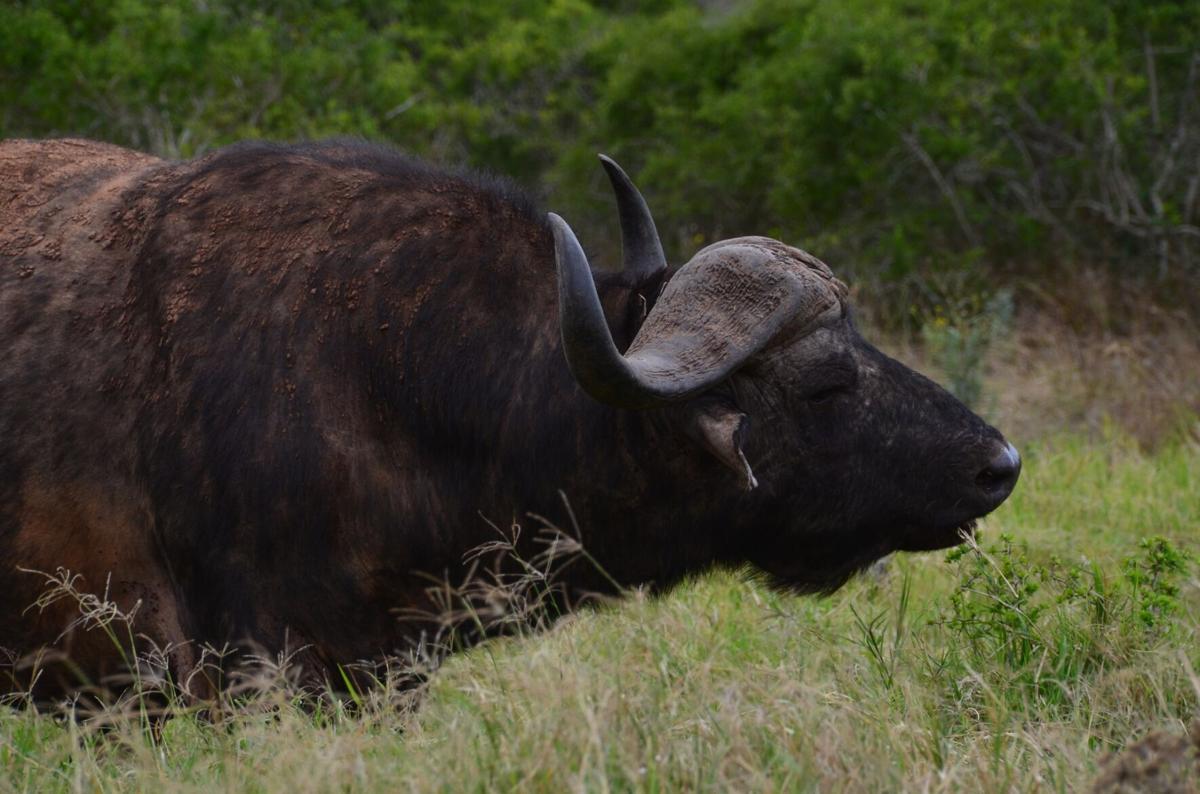 ON THE ROAD in Tanzania: Bateman, on the way to Ngorongoro and his buffalo rendezvous.

OUR TANZANIAN game guide, Elvis Baranbas, on the Ngorongoro Crater floor. No, Elvis was not with us on our ill-advised walk.

So would you rather cope with Covid 19 for a few more months, or take your chances with an African Cape buffalo in heavy brush. My traveling companion Jim Clapp and I were up close and personal with such a buffalo during our 1981-82 trip around the world. And I would happily serve months more in quarantine than again take my chances with one of these beasts. Below is my story of the encounter, not seen in these pages for nearly 40 years.

“Every man should spend at least one night a month in the open, so as to shed all vain airs for a time.” – Joseph Von Eichendorf

BELIEVE ME, and I’m speaking from experience, an hour or so can do the job. You just have to choose the right spot.

For Jim and me, dusk at the fringes of Tanzania’s game-rich Ngorongoro Crater was that spot. Ignoring warnings and betraying a rashness whose depth would only later become clear, we decided to walk home at nightfall.

“Home” was a small rental dormitory just 20 minutes away from the Crater Lodge, where we had enjoyed a late afternoon beer. But what we thought would be a pleasant stroll left us with more white hairs than vain airs.

It also left us with a new respect for Africa’s animals and their territory. “Respect” may be a touch mild. “Stark fear” is more like it.

Explaining our decision to venture into the realms of elephant, buffalo, rhino and lion as darkness encroached is difficult.

We had probably been on one too many game runs. Just that afternoon, peering from a Land Rover’s roof hatch, we had seen animals in unmatched variety and numbers on the crater floor.

And, lulling us into the false sense of security with which we began our walk, those animals seemed completely oblivious to us. They didn’t care.

Lions scratched and stretched in the afternoon sun while we parked just three yards away. A female rhino and her calf, hardly dignifying our presence with a glance, walked within 20 feet of us. And herds of zebra and wildebeest often surrounded the Rover, not about to let us block their grazing turf.

YES, WE HAD BEEN warned that men on foot – particularly at night, when a dangerous element of surprise is added – can be threatening to wildlife. But we were naively enchanted by these animals, not at all concerned.

And a wide dirt road, one frequently used as a footpath during safer daylight hours, led to our dorm. Although the sun was setting, we thought we had plenty of time.

But the sun sets quickly in the tropics, and shadows were long when we started our walk. Within five minutes a Land Rover full of Tanzanian park rangers, bound for the lodge, stopped next to us.

“You know it’s not a good idea to walk outside at night,” the driver warned us. “There’s Cape buffalo out here. You should really get a lift back to the lodge with us, then catch a ride to the dorms later.”

But no, not us: Bluff, foolish and seeing a lot more light in the sky than actually existed, we insisted on walking.

“Well, be very very careful,” one of the rangers cautioned.

Moments after the Rover departed, these warnings took on a new urgency: I saw hulking shadows in the tall grasses to our right.

“Don’t look now,” I told Jim, the thin veneer of bravado in my voice scarcely disguising my fear, “but I think I see a couple of buffalo.”

Indeed, the shadows were cast by a pair of 1,000-pound Cape buffalo, each with horns spanning two yards. We now remembered the words of our game guide in Kenya: Buffalo kill more humans than any other African game species.

Normally peaceful, he had told us, these animals can become dangerous and unpredictable when startled.

WE PICKED UP our pace imperceptibly and quickly passed the two buffalo who, thankfully, ignored us. But our walk, now seeming as long as a marathon, was hardly over.

Ten minutes later, with the sky almost completely dark, we were not only scared, but lost. We had missed the turnoff to the dorm. Coming to an unfamiliar intersection, we stopped to get our bearings.

Then I sensed something in the brush right in front of us. I picked out a dark silhouette. Then came a violent lurch, and suddenly the shady figure became flesh. I was staring a huge buffalo in the face from within three yards.

My blood ran cold as a welter of scatter-brained escape strategies flooded my brain. But I knew the truth: If that animal  charged, I was a goner.

In another split second, the buffalo lurched again, this time back into the tall grass and away from us. Jim and I both heaved huge sighs of relief. But our sense of well-being was fleeting. We abruptly realized: 1. We were still lost. 2. It was still night. 3. The buffalo we had met was not the only animal out here.

TENTATIVELY, WE took a right turn, heading in a direction we thought might take us home. But after five minutes, we had seen nothing familiar.  Desperate, we knocked on the door of the first home we came to.

A wide-eyed Tanzanian woman listened to our story in disbelief.  “Aren’t you afraid?” she responded after we had asked directions.

“AREN’T YOU AFRAID??” she repeated, with greater urgency.

We re-stammered our affirmative answer, and the woman began to realize there really were humans foolish enough to walk through big-game country after dark.

“The dormitory’s not far,” she finally said, pointing the way.

In another three minutes, we were lost again. Fear had superseded our ability to follow directions.  I saw another house and yelled to a man in the doorway. He acknowledged my plea, and I stepped toward him.

But my progress was rudely halted by a four-foot fall into a drainage ditch. Now humiliation was heaped upon terror.

The African homeowner, however, was a true Samaritan:  Guiding us with a flashlight, he led us to a small bridge, which crossed a streambed and led to the dorm.

LESS THAN TWO minutes later, we met two men at the edge of the village.

“Walk quickly and quietly now,” one cautioned. “There’s a buffalo on the right.”

“When will it end?” I asked myself.  But, lucky again,  we successfully skirted the grazing beast.

Then we passed the dormitory, and headed directly for a small restaurant and bar. There I ordered a plate of rice and beans, along with a double shot of Konyagi (Tanzanian whiskey).

“Muzungus!” I scoffed at myself, echoing the ranger’s understandable exasperation at idiot Americans.

(A reporter’s note, appended nearly 40 years after this story first appeared in the UD: Who the heck is Joseph von Eichendorf, that guy whose words head this tale? And how did the much-younger me come up with that quote?  According to Wikipedia, Von Eichendorf (1788-1857) was a Prussian poet. I could not find the “vain airs” quote, but I must have stumbled across it somewhere. And my decision to use it?  Well, as one of my college professors once scrawled atop a term paper, “Erudition for erudition’s sake.”)